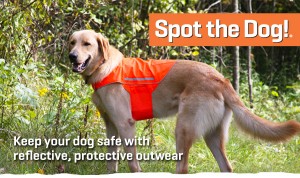 Hunting season doesn’t mean you have to stay home, but it is important to take some precautions before you hit the trail.

First, check the rules for your area. Generally, archery and gun seasons start in October and runs through January, but seasons varies from state to state and location to location.

The single most important precaution you can take during hunting season is to make sure you are visible by wearing bright, blaze orange. Your orange should be visible 360° around your body, from all angles. I have a blaze orange jacket and a bright orange backpack specifically for fall hiking. You can buy cheap blaze orange vests at any store that sells hiking gear or sporting goods. Target has them for $5. Blaze orange hats are good too. Around Halloween, a lot of places sell bright orange trash bags that you can use as pack covers. Also try to avoid wearing brown or white gloves or socks that might be mistaken for the flash of a deer’s tail.

Dogs should also be outfitted with a blaze orange collar, scarf or vest like this one below from Mudd +Wyeth. If your dog runs around off trail or chases game, keep it on a leash. In fact, you should both stay on the trail; hunting season is not the time for bushwhacking. Most trails are considered safe corridors and hunters should refrain from shooting on or near established footpaths. Overall, hunting accidents involving hikers are rare.

Still nervous? You can always hike in a place that doesn’t allow hunting at all. Most National Parks are hunt-free (always check before you go), many state parks have limited hunts and 11 states – Connecticut, Delaware, Maine, Maryland, Massachusetts, New Jersey, North Carolina, Pennsylvania, South Carolina, Virginia and West Virginia – ban hunting on Sundays.