Up For Adoption: Rory, Penny & Leo 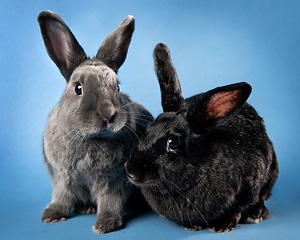 Poor Rory. She recently got downgraded from her communal cat room to a single-occupancy cage. “Was it something I said?” she asks. Well, the catty remarks she’s made to other kitties here didn’t help. Fortunately, Rory has no beef with people. But she does have spirit—like a liberated princess. Give her a kingdom to rule, don’t make her fight for attention, tell her she’s beautiful, brush her long locks only until she says stop—and she’ll be the sweetest, purringest kitty you’ve ever had. Really, it’s not that much to ask. Especially if you’ve got a sense of humor.

Three things make Penny and Leo blissfully happy: fresh greens, toys that make noise, and each other. These two are best, best buds—we’ll often catch Leo grooming Penny’s ears, or Penny burying her face in Leo’s fluffy shoulder. And they always nap together. First thing in the morning, you’ll hear a flurry of thumps and jingles coming from the bunny pen, as these two pals play soccer with a bell toy or toss sticks into the air! Penny and Leo were previously adopted from us about a year ago (Leo stars in our 2013 calendar!), but came back because they aren’t lap bunnies. It’s true—they’re not total snuggle bunnies with people. But they do crave human companionship, and would love a new soccer partner! Plus, they’re a great match for first-time rabbit owners. A Penny and Leo for your love?