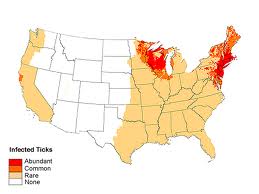 BURLINGTON – Wonder where the ticks are lurking in your community?

The Health Department’s new “Tick Tracker” provides a place to report tick sightings online and to view a map of tick activity in Vermont. The Tick Tracker is crowd-sourced and anyone can contribute by posting where and when they see ticks at http://healthvermont.gov/ticktracker.

“Once you report ticks in your area, it shows up on a map so that everyone can know where they might want to take extra precautions when spending time outdoors,” said Erica Berl, an infectious disease epidemiologist. “It’s not too late to report – adult ticks are most active in the spring and fall.”

The site also has links to information about tick-borne diseases and preventing tick bites.

The deer tick, which can transmit Lyme disease, has become the most frequently found tick in Vermont. Cases of Lyme disease reached an all-time high in 2011, with more than 500 reports of people who were likely exposed in the state. In 2012, there were 367 reported cases with likely exposure.

The role of climate change could be a factor in the growing numbers.

“Climate change may increase the likelihood that new tick-borne diseases will spread into our region, so monitoring the tick population could help provide an early indication of emerging health threats,” said Heidi Hales, program chief of the Health Department’s Climate Change Adaptation program.

The Health Department is also working to raise awareness about Lyme disease. A deer tick must be attached for about 36 hours before the Lyme disease bacterium can be transmitted. Prompt removal can prevent illness, so everyone should get in the habit of checking themselves for ticks at least once a day. Lyme disease can be effectively treated with antibiotics. Left untreated, the disease can be serious and affect the skin, heart, nerves or joints.

“People are always asking us, where are the ticks?” Berl said. “And similar to the Health Department’s crowd-sourced map of blue-green algae, now we can show them.”